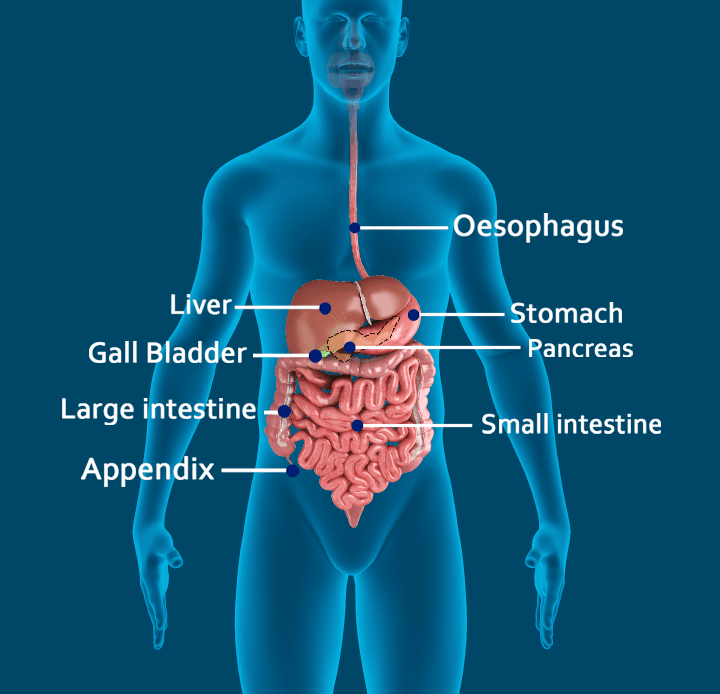 The gastro-intestinal system is essentially a long tube running right through the body, with specialised sections that are capable of digesting material put in from the mouth and extracting any useful components from it, then expelling the waste products at the anus.

The stomach is a ‘j’-shaped organ, with two openings-the oesophageal and the duodenal- and four regions- the cardia, fundus, body and pylorus. Each region performs different functions; the fundus collects digestive gases, the body secretes pepsinogen and hydrochloric acid, and the pylorus is responsible for mucus, gastrin and pepsinogen secretion. The layer of mucus prevents the stomach from digesting itself.

The stomach has five major functions;

The liver is the largest organ in the body, normally weighing about 1.5kg (although this can increase to over 10kg in chronic cirrhosis). The liver is the main organ of metabolism and energy production; its other main functions include: • Bile production (to help in digestion)• Storage of iron, vitamins and trace elements • Detoxification of poisons and other products • conversion of waste products for excretion by the kidneys •
Gall Bladder: The gallbladder is a 8 Cm pear-shaped organ which lies just below the liver. It accepts bile from the liver, and stores it. Bile is a watery, greenish-yellowish fluid produced by the liver which aids in the digestion of fatty foods.

Functions of the gall bladder

The pancreas is located in the abdomen, tucked behind the stomach. It is shaped somewhat like a tadpole – fat at one end and slender at the other – and is around 25cm in length. The pancreas has dual roles; it is an organ of the digestive system (exocrine) and of the endocrine (hormonal) system. Once food has been mulched and partially digested by the stomach, it is pushed into the duodenum (first part of the small intestine).

The duodenum forms a ‘C’ shape around the head of the pancreas. Its main function is to neutralise the acidic gastric contents (called ‘chyme’) and to initiate further Digestion; Brunner’s glands in the submucosa secrete alkaline mucus which neutralises the acidic chyme and protects the surface of the duodenum.

-The jejunum and the ileum are the greatly coiled parts of the small intestine, and together are about 4-6 metres long; the junction between the two sections is not well-defined. The mucosa of these sections is highly folded (the folds are called plicae), increasing the surface area available for absorption dramatically.

Appendix: Vermiform Appendix is an outgrowth of the caecal part of the larger intestine of the GI system. In humans it is a vestigial organ containing lymphatic tissue and serves no function in normal digestive processes. Appendicitis is caused by inflammation of the appendix.